Difficulty in obtaining satisfactory productions, the problem of soil fatigue

A very common problem, both in fruit growing and in horticulture, is the increasing difficulty in obtaining qualitatively and quantitatively satisfactory productions, without this being attributable to a known and easily identifiable cause. More and more often the cause of this type of difficulty is the problem of "soil fatigue" caused by excessive use of mineral fertilizers, deep soil tillage, irrational irrigation but above all replanting and monoculture, all factors that reduce the quality of agricultural soils with inevitable repercussions on crop productivity and quality of production. A modern and integrated approach is therefore necessary in addressing this problem and in trying to solve it.

As part of an integrated strategy of restoration of the quality of agricultural soils, the use of biostimulants of root development can be very useful, they allow plants to overcome the stresses generated by soil fatigue and restore an abundant, well-structured and functional root system. For these purposes Agriges recommends the use of the NEMA 300 WW, a bioactivator of root development of completely vegetable origin composed of vegetal oils and rare officinal essences whose chemical composition gives the product an auxin-similar action, a similar activity to that carried out by auxins, plant hormones that stimulate the development of the root system.

Since its born, the product has been tested in numerous field tests, both by the Agriges field technical service (FTS), by test facility and in research projects such as the European Biofector project. The tests were carried out on different crops and in different areas of the world and the fundamental results can be summarized in an increase in the volume and root functionality which correspond, therefore, to the improvement of a series of physiological parameters of the plant and to a qualitative and quantitative improvement of production.

By way of example, we report a test carried out last year, on grapevine cv. Minutolo, conducted by the Agriges field technical service (FTS) in the province of Taranto, in Quaranta Silvana Farm. The aim of the test was to verify the effectiveness of root treatment with NEMA 300 WW, applied at 20l / ha just before budding, on root development and on improving budding itself.

The application of NEMA 300 WW increased the percentage of budding by 12% compared to untreated (table 1) and doubled the volume explored by the roots (Figure 1). 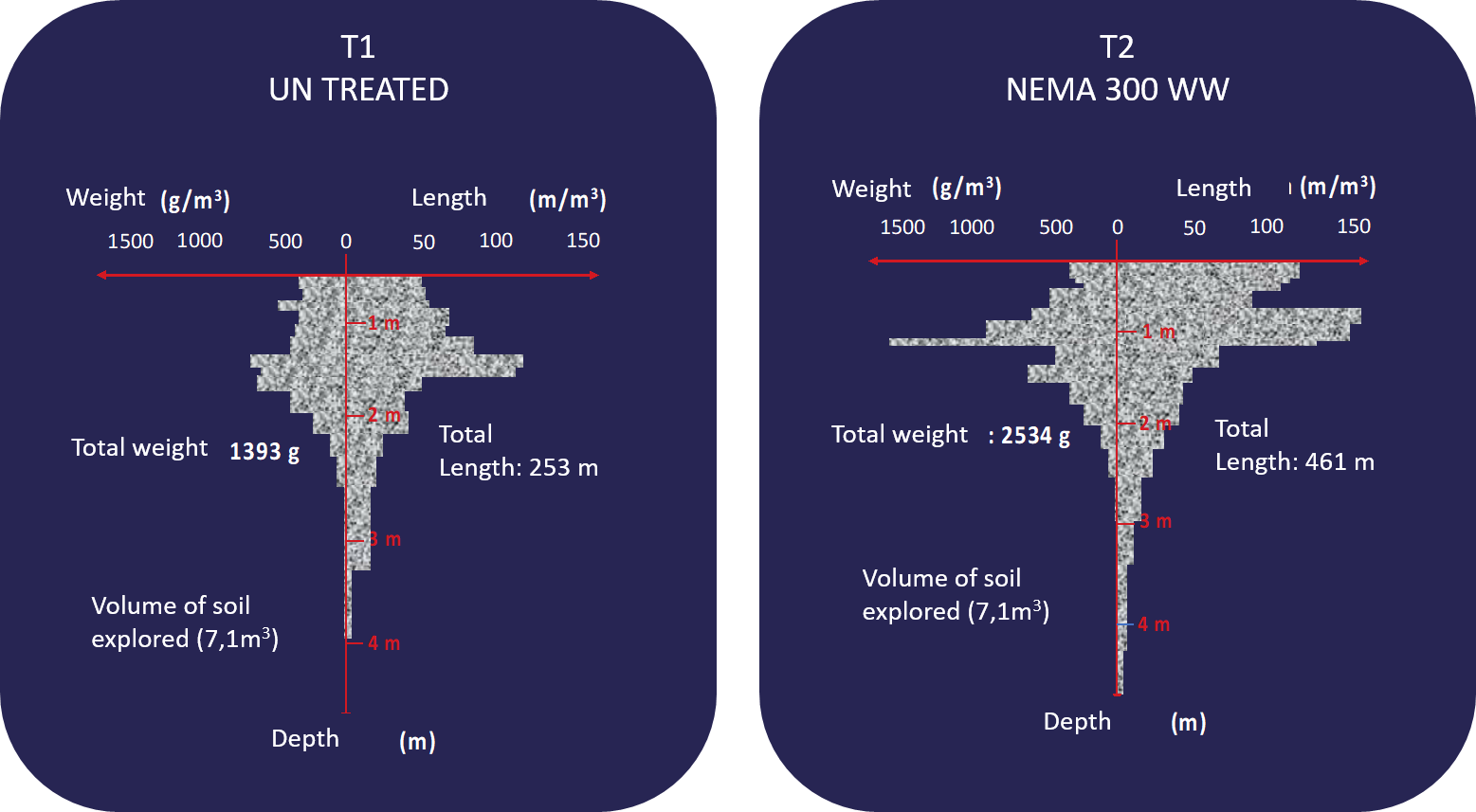 Ultimately, the use of the NEMA 300 WW product:

- increases the endogenous resistance of the plant to adversity;

- stimulates the plant to thicken the cortical tissue of the root.

The benefits that the NEMA 300 WW product brings to the root system of the plant have a positive impact on its productivity, significantly improving yields.