The problem of replanting and drop in production (“sickness”) of soils becoming increasingly serious in specialized areas intended for fruit-bearing and horticultural crops. It is closely linked to the general decline in soil fertility, as well as to the use of a limited number of elective crops, excessive mineral fertilization, use of chemical methods for soil disinfection, excessive work processes, poor availability of organic matter and decreased soil microbial complexity.

The so-called plant vigour mediated disease is linked to the correlation of two main factors, namely:

1) scarcity of the biotic component in the soil (represented by the microbial communities responsible for soil functional processes);

2) decline of the physical, chemical and biological parameters of the soil depending on the altered organic matter cycle (i.e. soil structure, availability of nutrients, biomass content, humus and humification process, presence of phytotoxic substances, heavy metals and others).

In the past, the use of methyl bromide ensured very good results at low costs but, in implementation of the Montreal Protocol, the European Community has banned its use as a substance harmful to the ozone layer. This has increased the interest in possible alternative techniques to fumigation, including among other: physical means (solarization, steam), agronomic means (herbaceous grafting, crop rotations), and biological means (use of antagonistic species).

A now widespread and very effective technique consists in solarization, which exploits, for disinfection purposes, the heat of the solar irradiation on the soil covered by plastic film; placing organic material underground can often ensure greater effectiveness thanks to the beneficial action performed by the volatile substances generated by its decomposition. The covering must be made with films characterised by high thermal efficiency that allow achieving high temperatures for long periods of time.

Solarization cannot be seen as a mere chemical treatment and therefore must be carried out in synergy with other good agricultural practices, among which the availability of organic matter should be deemed crucial, as it plays a key role. The soil is actually a living ecosystem, where a central role in maintaining the balance between the biotic components is played by the humus. 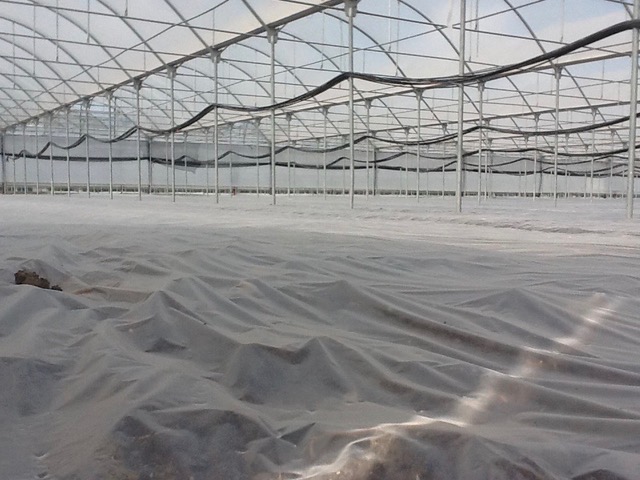 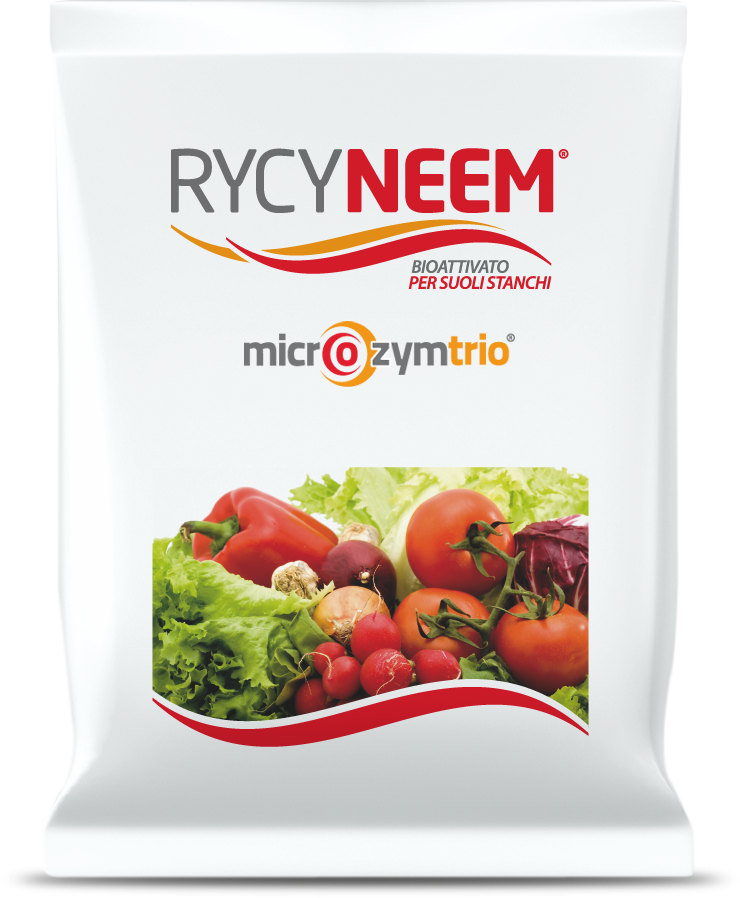 RYCYNEEM is a revitalizing basal fertiliser specially intended for exhausted and depleted soils, designed specifically to increase their long-term fertility. It is a product based on valuable raw materials of plant and animal origin, activated by bacterial strains, namely: Thermoactinomyces spp., Streptomyces spp. and Bacillus spp., which are obtained through the exclusive MICROZYMTRIO production technology and are responsible for ensuring the high and constant effectiveness of RYCYNEEM against the soil fatigue.

RYCYNEEM revives the soil, rebalances its microbial component and nourishes the plant with harmony.

Agriges recommends its application before solarization, so as to maximize its effectiveness and improve the soil liveability.

Compared to previous years, the product has been improved with the addition of micronized sulfur, this element increases the effectiveness of the product in improving the characteristics of the soil, in particular by rebalancing the pH of alkaline soils and desalinating sodium soils. In addition, the quick-acting micronized sulfur promotes the absorption of other nutrients present in the soil, in particular iron and calcium, and has a direct nutritional action on the plant, improving the quality and durability of crops.

This product is able to provide nutrients immediately available for the plant as well as slow-release nutrients, which is made possible thanks to the balance between the plant and animal components contained in it. This product is rich in protein complexes with variable mineralization; it gradually releases nitrogen, phosphorus, potassium, and micro and meso-elements, such as calcium and sulphur; in particular, its high organic nitrogen content guarantees a high and constant release of nitrogen for the plant.

Its high content in organic matter with high humification rate, stable and with an optimal C/N ratio, nourishes the useful microbial population of the soil, acting as a sponge for water and nutrients, which it then releases gradually and in line with the specific needs of the plant, thereby resulting in permanently increased soil fertility.

In the product there are:

- vegetable press cakes of Brassicaceae, which have always been used in the practice of green manure to enrich the organic reserve in the soil and reduce fatigue phenomena;

The microbial consortium of MICROZYMTRIO is made up of micro-organisms, all heat-resistant: Thermoactinomyces spp., Streptomyces spp. and Bacillus spp., this allows avoiding phenomena of "biological vacuum", which occur as a result of solarization, ensuring an earth environment rich in useful micro-organisms.

- The MICROZYMTRIO technology isolates microorganisms directly from the press cakes of Brassicaceae that make up the product, thus ensuring maximum mineralisation capacity of the plant component as well as high effectiveness of action.

- The mineralisation of vegetable press cakes, containing important organic compounds, releases a high concentration of volatile molecules that, spreading throughout the soil volume, improve its liveability for the plant.

- The microorganisms of MICROZYMTRIO, at a radical level, behave like Plant Growth Promoting Rhizobacteria (PGPR), performing a direct action of development promotion of the plant as well as of its endogenous defence capabilities against possible pathogenic attacks. 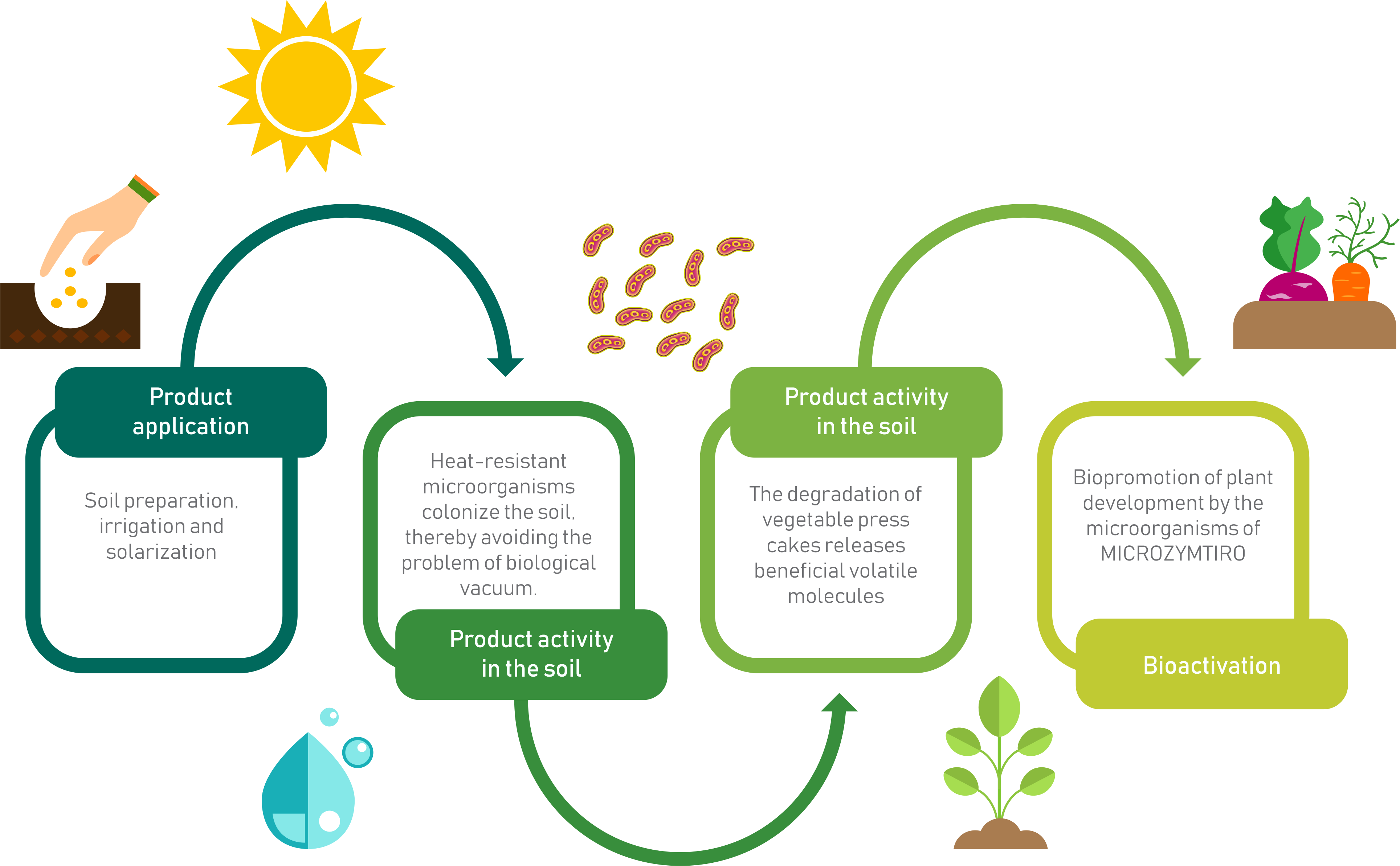